Cinderella is January’s Band of the Month! 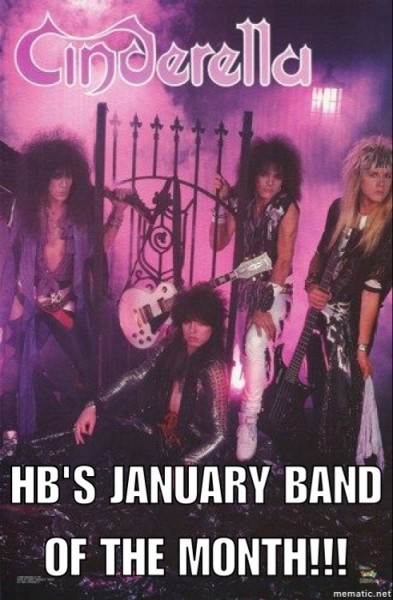 Keepin’ things shakin’ to get you through a Long Cold Winter!

Cinderella is an American rock band from the suburbs of Philadelphia, Pennsylvania. The band emerged in the mid-1980s with a series of multi-platinum albums and hit singles whose music videos received heavy MTV rotation. Cinderella had a heavy metal sound initially before shifting more to hard rock/blues rock.

By the mid-1990s, the band’s popularity declined severely due to personal setbacks, break-ups, and changes in the music industry. The band has reunited on multiple occasions performing on package tours and rock n’ roll themed cruises along with many other acts from their generation. However, the band is currently inactive due do personal matters. The band has decided not to tour as Cinderella until all original members are involved, healthy, and honoring their agreement to each other.

The band has sold 15 million albums worldwide, according to Tom Keifer’s official website. After an incredibly long wait and delays due to vocal troubles, Tom Keifer released a 2013 solo album, The Way Life Goes, and continues to tour with his solo band.

Top 10 songs on iTunes:
-Don’t Know What You Got (‘Til it’s Gone)
-Nobody’s Fool
-Shake Me
-Gypsy Road
-Coming Home
-Somebody Save Me
-Bad Seamstress Blues/Falling Apart At the Seams
-Night Songs
-Shelter Me
-Heartbreak Station

Our favorite Cinderella tracks!
-Nothin’ for Nothin’
-Push Push
-Shake Me
-Gypsy Road
-If You Don’t Like It
-Night Songs
-The More Things Change
-Nobody’s Fool
-Back Home Again
-Don’t Know What You Got (‘Til it’s Gone)