The Band of the Month for March is Whitesnake! 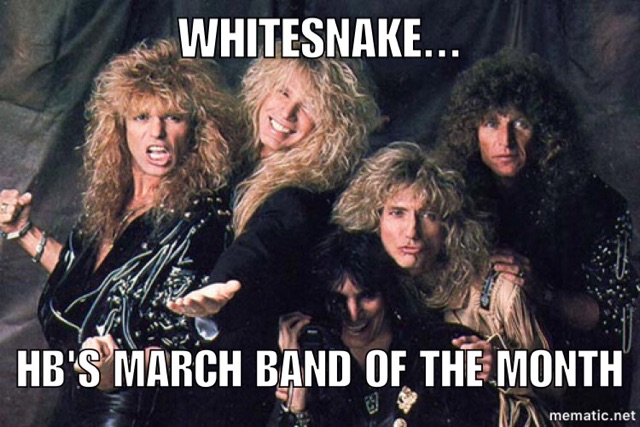 Whitesnake are a rock band formed in England in 1978 by David Coverdale, after his departure from his previous band Deep Purple. Their early material has been compared by critics to the blues rock of Deep Purple, but they slowly began moving toward a more commercially accessible rock style. By the turn of the decade, the band’s commercial fortunes changed and they released a string of UK top 10 albums, Ready an’ Willing (1980), Come an’ Get It (1981), Saints & Sinners (1982) and Slide It In (1984), the last of which was their first to chart in the US and is certified 2x platinum.

The band’s landmark 1987 self-titled album was their most commercially successful worldwide, and contained two major US hits, “Here I Go Again” and “Is This Love“, reaching number one and two on the Billboard Hot 100. The album’s exposure was boosted by heavy airplay of its videos on MTV, which featured actress Tawny Kitaen, whom Coverdale later married and eventually divorced.

Slip of the Tongue (1989), was also a success, reaching the top 10 in the UK and the US, and received a platinum US certification. The band split up shortly after this release, but had a reunion in 1994, and released a one-off studio album, Restless Heart (1997). Whitesnake officially reformed in 2002 and have been touring together since, releasing three studio albums, Good to Be Bad (2008), Forevermore (2011) and The Purple Album (2015).

Did you know? Here are some interesting facts about WHITESNAKE!

-Whitesnake has had some of the most badass guitar players of all time. John Sykes (Thin Lizzy), Steve Vai, Reb Beach (Winger), Doug Aldrich, Warren DeMartini (RATT), Joe Hoekstra (Night Ranger), Adrian Vandenberg, Vivian Campbell (Dio, Def Leppard), and many more have all shredded the strings for the Snake!

-In 1985, Whitesnake started working on new songs for the next album, but Coverdale soon contracted a serious sinus infection that made recording close to impossible for much of 1986 and which had doctors thinking he might never sing again. Coverdale eventually recovered, and the band resumed recording what would become the band’s legendary 1987, self titled album. . . The album has sold over 8 million copies since it’s release.

-After Coverdale folded the band in 1990, he started to work with former Led Zeppelin guitarist, Jimmy Page, which resulted in the album Coverdale•Page (1993). . . Soooo add another badass guitar player to that list, yeah?

-In 2016, Coverdale was inducted into the Rock and Roll Hall of Fame as a member of Deep Purple, giving one of the band’s induction speeches.

-One time Tawny Kitaen liked one of Mick Jäger’s pictures on Instagram. . . He still hasn’t stopped talking about it.

Here are the top 10 songs on iTunes:

Some of our favorite Whitesnake songs!

Too many good ones!