The Band Of The Month for December is KISS! Merry KISSmas! 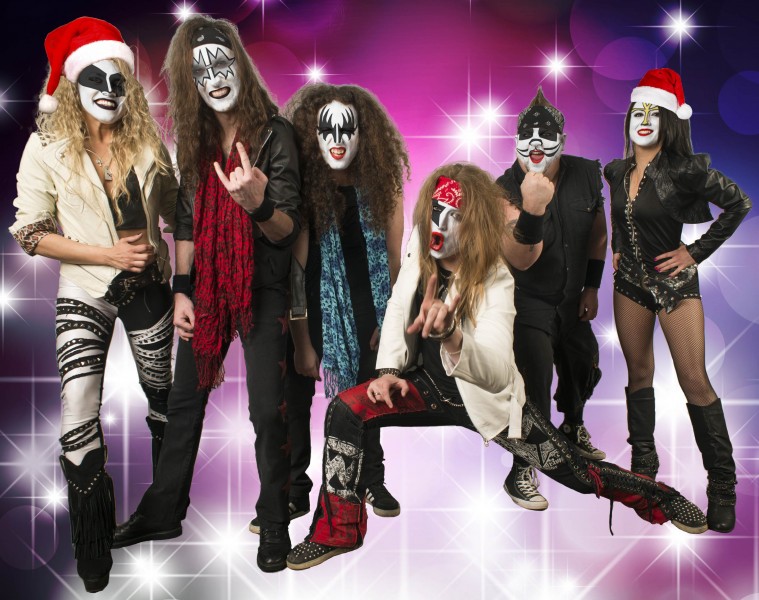 You wanted the best, this IS the best! The hottest band of the month. . . .MERRY KISSmas!

KISS is an American rock band formed in New York City in January 1973 by Paul Stanley, Gene Simmons, Peter Criss, and Ace Frehley, who sought to create, “The band they never saw.” Well known for its members’ face paint and stage outfits, the group rose to prominence in the mid-to-late 1970s with their elaborate live performances, which featured fire-breathing, blood-spitting, smoking guitars, shooting rockets, levitating drum kits, and pyrotechnics. With their make-up and costumes, they took on the personae of comic book-style characters: The Starchild (Stanley), The Demon (Simmons), The Spaceman or Space Ace (Frehley) and The Catman (Criss).

After releasing 3 studio albums, their big break came in an unlikely form: the “double live” album, Alive!. The success of Alive! not only brought KISS the breakthrough they had been seeking, but arguably saved Casablanca, which was close to bankruptcy. Between 1976 and 1978, KISS earned $17.7 million from record royalties and music publishing, and an estimated $100 million in merchandise sales. A 1977 Gallup Poll named KISS the most popular band in America. In Japan, KISS performed five sold-out shows at Tokyo’s Budokan Hall, breaking the previous record of four held by The Beatles.

Following 4 solo albums, the failed made for TV movie KISS Meets The Phantom Of the Park, a flirtation with disco, lineup changes, and the release of several poorly received albums, KISS reinvented themselves in 1983 by releasing the album Lick It Up, and “unmasking,” on MTV. The band adopted a sound more akin to the hair metal bands of the 80’s than their signature 70’s classic rock stylings. KISS then experienced a commercial resurgence via a string of mainstream hits and platinum albums throughout the decade of decadence.

On August 9, 1995, KISS joined the long line of musicians to perform on MTV Unplugged. The band contacted Criss and Frehley and invited them to participate in the event. In response to a wave of KISS nostalgia in the mid-1990s, the band announced a reunion of the original lineup in 1996, which also saw the return of their makeup and stage costumes. The reunion was a massive commercial success, selling out arenas and stadiums all over the world in minutes. KISS has sold more than 100 million records worldwide, including 25 million RIAA-certified albums. Though the reunion did not last, Paul and Gene have trekked on with drummer Eric Singer and Tommy Thayer, and after 40 years of rock n’ roll, they continue to release music and perform all over the world.

It’s important to note that KISS achieved their success with very little support from radio. Instead, their success is attributed to a massive, die hard following known as the KISS Army. The KISS Army started in Indiana in the early 70’s when a local radio station refused to play any KISS songs. Protesting fans marched outside of the radio station and referred to themselves as the KISS Army. The KISS army still stands strong, and are still very active in showing their love for the band, including protesting outside the Rock And Roll Hall of Fame in Cleveland, OH in 2006. Regardless of the Rock and Roll Hall of Fame’s best efforts to snub the band, KISS were finally inducted in 2014.

Did you know? Please enjoy the 12 facts of KISSmas

2. Gene Simmons has been in long term relationships with Cher and Diana Ross. He is currently married to Playboy Playmate Shannon Tweed. They have 2 children together.

3. The “SS” in the KISS logo happen to look similar to the insignia of the Nazi SS, a symbol that is outlawed in Germany. Since 1979 most of the band’s album covers and merchandise in Germany have used an alternate logo, in which the letters “SS” look like the letters “ZZ” backwards. This logo is also used in Austria, Switzerland, Poland, Lithuania, Hungary, and Israel to avoid controversy.

5. KISS’ music has been covered by artists of all different genres such as, Anthrax, Garth Brooks, Poison, The Might Mighty Bosstones, and Lenny Kravitz.

7. The band’s second drummer, Eric Carr, passed away on November 24, 1991. The same day as Freddie Mercury of Queen.

8. KISS’ record label wanted to terminate their record deal if they did not remove their signature makeup on their first album cover.

9. Pantera guitarist, Dimebag Darrell was buried in a KISS Kasket, as requested in his will.

10. Paul Stanley was nearly the producer for Guns N’ Roses, Appetite for Destruction

Here are some of OUR favorite KISS songs: