The Band of the Month for April is WARRANT! 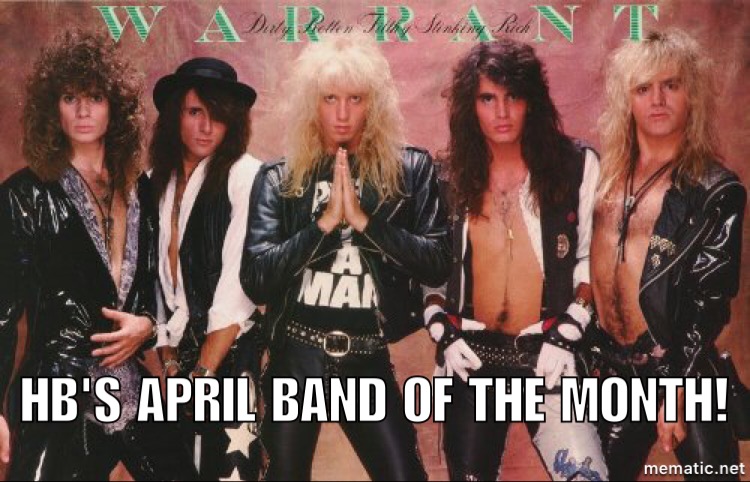 Hairbanger’s Ball is serving up a slice of WARRANT band of the month all April long!

Warrant is an American glam metal band formed in 1984 in Hollywood, Los Angeles, California, that experienced success from 1989 to 1996 with five albums reaching international sales of over 10 million. The band first came into the national spotlight with their Double Platinum debut album Dirty Rotten Filthy Stinking Rich, and one of its singles, “Heaven,” reached No. 1 in Rolling Stone and No. 2 on the Billboard Hot 100.  The band continued its success in the early 1990s with the Double Platinum album Cherry Pie which provided the hit album titled song and music video.

Following the critically acclaimed Gold album Dog Eat Dog the band started to experience frequent changes to the line-up and despite the drop in popularity with the arrival of grunge, they released Ultraphobic in 1995 and a successful best of album in 1996.  The band also changed their musical direction with the release of the grunge influenced Belly to Belly in 96, but returned to their roots very quickly by the end of the decade.  Into the new decade former lead singer and main songwriter Jani Lane passed away due to acute alcohol poisoning.  After over 30 years, the band is still recording music and performing, now with ex-Lynch Mob lead vocalist Robert Mason.
P.S. Our very own Mick Jäger (aka Brian Durbin) jammed with Lynch Mob once and it was bad ass. . . Check it out here: https://www.youtube.com/watch?v=kH93bU9EXyI

Did you know? Here are some fun facts about our band of the month!

-After achieving fame on the L.A. club scene, the band recorded a demo tape in September 1987 for Paisley Park Records, a record label owned by musician Prince. . . Yes THE Prince!

-Warrant’s European tour with David Lee Roth was cut short after Jani Lane fractured several ribs in a stage dive in Birmingham, England.  Warrant soon returned to touring, headlining shows in America on their ‘Blood, Sweat And Beers’ tour, supported by FireHouse and Trixter. . . Mick Jäger bought this DVD for his cousin years ago, and both can testify to it’s true tenacity!

-The Cherry Pie album was originally titled Uncle Toms Cabin until the record label told the band they needed a song like “Love in an elevator” by Aerosmith.  Later that night, Jani Lane wrote a song called Cherry Pie.  The album was later named “Cherry Pie,” and the band did cherry pie eating contests in promotion of the album.  Jani Lane was later quoted as saying “I could shoot myself in the fucking head for writing that song!” . . .Don’t believe us?  Check it out here: https://www.youtube.com/watch?v=OR1xpknCHCQ

-Producer Beau Hill enlisted the talents of a session guitar player named Mike Slammer to record a portion of the album Dirty Rotten Filthy Stinking Rich’s guitar solos.  In regards to the executive decision, guitarist Joey Allen had these words to say: “It was a Beau Hill thing, what a dickhead.  I’ll tell you one thing, I played on all three records.” . . . OUCH guys!  Can we get some ketchup for all these harsh browns you guys are serving up, yeah?

P.S. Does anyone know who these Down Boys are, and where they go?  Polly Pantz and Clare Crush want to know.  Thanks.